The science of self-repair: regeneration research at Whitehead Institute

Living things have to be resilient to survive. Most animals will suffer an injury at some point, and the speed and success of their recovery may determine whether they live or die. When it comes to recovering from substantial bodily damage, certain animals have an ace up their sleeves: regeneration. This is the set of biological processes that certain species use to repair or even replace damaged parts of their bodies. Some animals, including species of starfish, lizards, and salamanders, can regrow entire limbs. Other animals, including species of worms and sponges, can grow a whole new body from a small surviving piece. Although humans have some regenerative capacity—for example, our skin can often repair itself from wounds—this ability pales in comparison to that of these resilient species. Figuring out how to unlock the capability to regenerate limbs and organs is the holy grail of regenerative medicine.

Researchers at Whitehead Institute are uncovering the underlying genetics, mechanisms, and principles of regeneration. The question of why some mammalian organs can regenerate while others can’t drives Whitehead Institute Fellow Kristin Knouse’s research. Whitehead Institute Member Peter Reddien studies a species of flatworm capable of regenerating any part of its body. Rudolf Jaenisch, a Whitehead Institute Founding Member, has investigated ways to manipulate and alter stem cells which have the potential to develop into a number of different cell types. Read about some of this research below and to learn more, follow the links to recent news pieces and videos.

Deciphering the rules of regeneration

Reddien, also a professor of biology at Massachusetts Institute of Technology and an investigator with the Howard Hughes Medical Institute, studies planarians (Schmidtea mediterranea), a type of flatworm with incredible regenerative capabilities. A planarian can be cut into many pieces and each piece will regrow into a full worm within about two weeks. Research into how planarians achieve this feat could lead to a better understanding of the necessary factors for regeneration, both in planarians and more broadly. Although Reddien works primarily with planarians, he and then-postdoctoral researcher Mansi Srivastava, now an assistant professor at Harvard University, also introduced a new model species for regeneration research, the three-banded panther worm, in 2014. Most of the genes Reddien’s lab has found with key roles in regeneration in these species have conserved counterparts in the human genome. The researchers study planarians and panther worms, which are well suited for experiments, to uncover general principles of repair and regeneration across species.

One of Reddien’s main focuses has been understanding how the cells within a planarian — or a piece of planarian — know where to go and what to become when they regenerate missing parts. How is the blueprint of the body maintained and communicated between cells? How do the animals determine what part of the body is missing?

Reddien’s lab discovered that planarians’ muscle tissue is crucial for orchestrating proper regeneration. In 2013 they found that neoblasts, planarian stem cells, are directed in where to go and what to become by position control genes (PCGs), and that these genes are expressed exclusively in muscle tissue. PCGs provide a sort of GPS for cells, maintaining a map of the body through signals secreted from muscle tissue, to guide regeneration and regular cell turnover. Graduate student Amelie Raz and Reddien found that muscle also orchestrated regeneration in the three-banded panther worm, raising the possibility of an ancient widespread role for muscle in promoting regeneration in the animal kingdom.

Fluorescent microscopy of a planarian.

In order to understand how planarian muscle became so critical for regeneration over the course of evolution, Reddien has been investigating the tissue more broadly to determine all of its roles. Planarian muscle is revealing itself to be a versatile tissue, and he and graduate student Lauren Cote found that it serves as the animal’s connective tissue, providing structural support for the body in the way that bones, tendons, ligaments and other tissues do in mammals. One of the roles of connective tissue is to secrete the extracellular matrix, the stuff between cells that provides them with scaffolding, protection, physical separation, as well as a medium for intercellular communication. They speculate that planarian muscle’s connective role might be tied to its role in regeneration, as both tasks relate to maintaining the body’s architecture. They are interested in the broad role that connective tissue might have in animal regeneration.

To explore the factors guiding cells during regeneration, Reddien and graduate student Kutay Deniz Atabay used eye regeneration as a case study. They found that the final destination of progenitor eye cells was determined by competing signals from the PCGs and the proximity of pre-existing or regenerating eyes. This research helps to explain how planarians deal with the mismatch that arises between the body map encoded in their muscle and their actual anatomy after a wound or dissection.

Reddien and graduate student Christopher Fincher completed a transcriptome atlas of the planarian: a complete catalog of which genes are active in every cell type of the planarian. Although every cell in an animal has the same DNA, gene expression in each cell — which genes are turned on, and how strongly they are expressed — determines the cell’s identity and activity. This whole-animal complete cell type transcriptome atlas is the first of its kind. Analyzing gene expression can reveal a lot about different cell types and how they respond to different signals and cues. This rich database should be a valuable resource in Reddien’s research, for example helping him to identify further genes involved in regeneration.

Kristin Knouse in the lab.

Whitehead Institute Fellow Kristin Knouse is working to understand the human body’s limited regenerative capability—what factors determine which organs can regenerate—by investigating the liver, an organ whose cells have the rare ability to regenerate and recover from even serious injuries. Humans have several tissue types that renew themselves regularly or can heal from wounds, such as skin and the intestinal lining. These tissues rely on stem cells, cells that can proliferate and differentiate into a range of cell types. What Knouse finds fascinating about the liver is that it is the only human organ in which differentiated cells, cells that have become fully specialized to perform specific tasks in a specific tissue type, can proliferate. In other organs, once cells become differentiated, they stop being able to divide and proliferate. Without a stem cell reserve or the ability to return to a proliferative state, these tissues have no options for regeneration. This is why if a person suffers injury to part of their heart, or brain, the organ can’t replace the missing cells. But if a person injures part of their liver, some of the liver cells begin to proliferate, dividing and generating replacement liver. Using mice, Knouse seeks to understand what makes liver cells capable of this sort of regeneration when other cell types are not, with the hope that this research could one day contribute to regenerative therapies for events such as stroke, heart attack, and neurodegeneration. 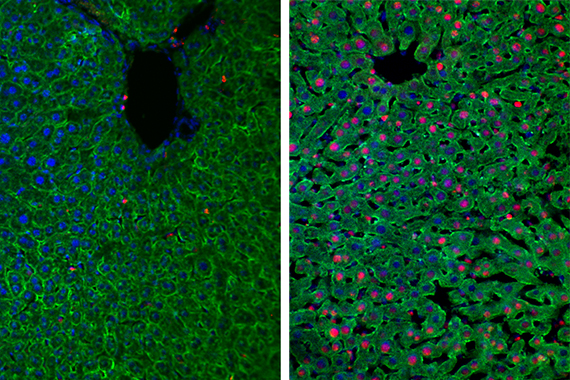 Knouse recently outlined three main avenues of investigation during a talk at Whitehead Institute. First, her lab is tracking individual liver cells to ask whether all liver cells can proliferate and what must happen as they transition back into a state of proliferation. Second, her lab is researching which genes are involved in liver cell proliferation. Third, her lab is trying to figure out why other cell types—specifically heart cells—do not proliferate when they receive the same stimuli that would activate stem cell or liver cell proliferation. Together, these studies will help to better understand regeneration, and will hopefully inform regenerative medical research.

Although Whitehead Institute Founding Member Rudolf Jaenisch’s research does not explicitly focus on regeneration, his lab’s innovations in stem cell research have greatly impacted the field. Jaenisch’s lab was one of the first to produce induced pluripotent stem cells (iPSCs), stem cells created by “reprogramming,” or resetting the developmental clocks, of adult cells back to a more flexible state. With the right cocktail of factors, iPSCs can be coaxed to differentiate into almost any desired cell type, providing researchers with better lab models of human biology. For example, a researcher studying neurodegenerative disease cannot experiment with the neurons inside the head of a person with Alzheimer’s, but they can study neurons created from iPSCs derived from that patient. Researchers in the regenerative medicine field are investigating ways that iPSCs could be used to replenish patients’ cells after disease, injury, or destructive treatments like radiation. Researchers are also looking into using iPSCs to grow replacement tissues derived from patients’ own cells, which could be introduced to the patients’ bodies more safely than donor tissue from other people, avoiding graft versus host disease and other issues that arise from patients’ immune systems mounting a defense against donor cells, which they perceive as a foreign threat.

Recently, the Jaenisch lab has used stem cells to study how the Zika virus affects brain development and can cause microcephaly, as well as a genetic disease that can cause intellectual disability called fragile X syndrome. They are also investigating ways to make cells derived from iPSCs more closely match human cell types, as the current approaches do not create perfect replicas. This will help to make iPSCs an even better in-lab model, and could also one day contribute to regenerative medicine.

Image
Looking Beyond the Gene: An Introduction
Stem Cells

Whitehead Institute researchers are uncovering new ways that genes are regulated that upend existing paradigms of gene expression and provide important insights into health and disease. This collection of stories and multimedia explores that research.

Whitehead Institute Member Rudolf Jaenisch and Shawn Liu, a postdoc in his lab, were chosen for the honor by STAT staff