Master of the opening game: Gerald Fink reflects on his first 50 years in science

From the moment he began working toward his Ph.D. in biology at Yale in 1962, Founding Member Gerald Fink has been a groundbreaking and prolific researcher. Fink’s seminal discoveries — DNA transformation in yeast, jumping genes, and invasive growth of pathogens — have provided key insights into basic science and the understanding of infectious disease.

But Fink’s 50-plus years in the lab reflect only part of his contribution to science. He’s also mentored graduate students and postdoctoral fellows, and taught courses at Cornell and Massachusetts Institute of Technology (MIT). Fink created and taught the legendary yeast molecular biology course at Cold Spring Harbor Laboratory. Fink is the recipient of the 2018-2019 James R. Killian, Jr., Faculty Achievement Award. He is also a respected global and national scientific leader as well, serving as president of both the Genetics Society of America and the American Association for the Advancement of Science. Moreover, he was also director of Whitehead Institute from 1990 to 2001, leading Whitehead Institute through major undertakings: expansion of the Whitehead Institute building; creation of the Center for Genome Sciences (which later became Broad Institute); and leadership as the largest private contributor to the Human Genome Project.

Fink recently closed his laboratory and is now intently focused on his roles as Whitehead Institute Member, professor of biology at MIT, mentor to younger scientists, advisor to a new biotech company, and éminence grise on national science policy in several domains, including the challenges of bioterrorism. Recently, the Annual Report’s editors asked Fink to reflect on his experiences in research, teaching, and leading Whitehead Institute.

Annual Report: You are recognized as a pioneer in bioscience research. Did you make a conscious choice to cut new scientific paths?

Gerald Fink: In chess, there are three phases — the opening, the middlegame, and the endgame. As a scientist, I’ve found that the opening is tailored to my disposition. I’d rather be a tiller of new soil than someone who harvests mature fields. There are advantages to the opening: You don’t have to read legions of detailed papers because they don’t exist yet; you can instantly become an authority; and there’s more freedom to explore uncharted territory.

When I began working with yeast in graduate school, yeast was considered suitable for baking or brewing with little potential as a model for biomedical research. In fact, my professors urged me not to pursue it. However, I enjoyed the opportunity that investigating novel aspects of yeast biology afforded me to pursue my own ideas. My yeast work ended up being fundamentally important to research and medicine. It’s been fascinating to watch the field of yeast-fo­cused research move from the brewery and kitchen to the laboratory. The field has grown from maybe thirty people in the early 1960’s to the thousands today who populate academic and commercial laboratories.

My lab’s success in tilling a new field of science was repeated yet again when my students and I helped pioneer the use of the plant Arabidopsis thaliana as a model organism. Scientists have learned more about Arabidopsis than any other plant; this important new knowledge is being used to increase food crop-yields in changing environments. One reason why yeast and Arabidopsis research proved so attractive is that scientists in these new fields were comfortable sharing their new information and reagents with colleagues. This cooperative habit of sharing continues to this day, and I encourage it in my students. I believe that the unimpeded flow of information is essential to move science forward and create a culture conducive to the most productive research. My students have carried on this legacy and have become prominent leaders in science both here and abroad. 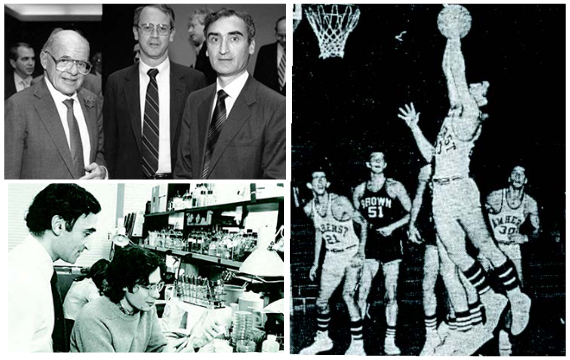 AR: How do you balance collaboration and competition in science?

GF: That’s a very complicated balancing act. I’ve always felt that while competition can be stimulating, exces­sively competitive environments are not the best atmosphere for training students. Perhaps it’s an extension of my preference for the opening. For that reason, I had many different projects running in my lab simultaneously; it was a mechanism to help students create fruitful paths for their own careers. Of course, that challenged me to continue to imagine novel questions and problems for them to investigate — and then educate myself about those topics to guide my students’ efforts. This style kept me on my intellectual toes, forcing me to voyage well beyond my areas of expertise.

Of course, serious competition will inevitably develop when there’s a gold rush. And that’s good. I faced lots of world-class competition in the hunt to discover a transformation system that enabled the introduction of exogenous DNA into yeast. There were at least 10 labs worldwide trying to achieve this goal. I enticed talented postdocs to work on this project and we figured out how to overcome a key hurdle — so we got there first and struck gold. Our success laid the groundwork for the benefits of yeast as biological factories for manufacturing pharmaceuticals and biofuels. Yeast is key to making both the hepatitis B vaccine and the ethanol that powers your car.

AR: What attracted you to move from Cornell to Whitehead?

GF: Joining the brand-new Whitehead Institute in 1982 fit my preference for the opening. What an opportunity to be present at the beginning! In addition, Whitehead offered a unique opportunity for collaboration — to work with scientists like David Baltimore, Rudolf Jaenisch, Harvey Lodish, and Bob Weinberg. I also appreciated the ethos that Jack Whitehead instilled. Jack thought that Whitehead Institute was the scientific Taj Mahal. Each year at our scientific retreat he told our students: Whitehead Institute provides so many opportunities, you should be the best.

AR: What were the primary challenges you faced when you succeeded David Baltimore as Whitehead Institute Director in 1990?

GF: My challenge as director was to guide the organization toward its middlegame. We were well established as one of the world’s foremost drivers of bioscience discovery. Yet, to continue taking chances on new ideas and brilliant young scientists, we would need more space and new facilities. A good example was our bet that the mouse and not the guinea pig or rat would become the model mammal for biomedical research into human disease. That choice required a dramatic investment in new facilities, but the gamble paid off; and today, ours is still the model that others emulate. That was part of a broader physical expansion of the Institute that involved organizational risk-taking: choosing farsighted research strategies; investing in advanced technologies; financing the building expansion; and learning to attract philanthropic support to build the addition to the original structure.

AR: What was your strategy for addressing those challenges?

GF: Partnership and collaboration have been fundamental to the Institute’s world-class success. And partnership and collaboration were my most valuable tools as a leader. Moreover, John Pratt, our chief operating officer, shared in the faculty’s vision of path-breaking and intrepid discovery; and his skills and interests were a perfect complement to my own. Together we built a consensus for action among our board members.

I also had an enormous stroke of luck when former Senator Paul Tsongas agreed to chair our board of directors. Although he was suffering from lymphoma, he agreed to help me raise the funds for the expansion. Despite his illness, he was a great public advocate for Whitehead Institute and his efforts catalyzed our success in achieving the new addition.

However, the most important collaboration by far was the cooperation and enthusiasm for this endeavor among my fellow Whitehead Institute faculty. I believed then — and still believe — that our most important decisions need to be reached through consensus. Collaboration and consensus were also fundamental to one of Whitehead Institute’s most significant organizational accomplishments under my watch — development of the Center for Genome Science (CGS). In the early 1990s, when [Former Whitehead Institute Member] Eric Lander and [Whitehead Institute Member] David Page became focused on genomics, the path forward was not clear at all, and the risks we took were significant. But the results have been even more significant. Whitehead Institute became the leading private contributor to the Human Genome Project and we grew the CGS into what has become the Broad Institute, a major force in basic science research. We also witnessed David Page change biomedical science’s understanding of the structure of the X and Y chromosomes — setting the stage for major changes in the practice of medicine in decades to come.

Today, the Whitehead Institute faculty and board face two of the same challenges that we grappled with 25 years ago: developing the resources to provide innovative scientists the freedom to follow their curiosity wherever it leads, and acquiring the advanced instrumentation that will permit them to explore new frontiers.

AR: We haven’t touched on the endgame. Is there one?

GF: The professional endgame is not in sight for me. I will continue to teach at MIT, and help to recruit new faculty at Whitehead. I also hope to spend more time on science diplomacy. When I was president of the American Association for the Advancement of Science, I led a delegation of American scientists to Cuba. The official relationship between Cuba and the United States had been frozen for over half a century, restricting scientific cooperation. During this 2014 meeting in Cuba I signed an agreement with the head of the Cuban Academy of Sciences to cooperate in four areas — infectious disease being the one of most interest to me, because many mosquito-borne diseases such as dengue, chikungunya, and Zika pose a dire threat to both countries. We have a lot to learn from Cuba about these diseases. Our agreement spawned a number of highly productive scientific interchanges, and I thought the opening had begun. Although the current political situation has halted this initiative, I will do everything in my power to reinvigorate our healthy connection to Cuba.

I’ve also joined the scientific advisory board of the Nuclear Threat Initiative’s Program on Bioterrorism. As Chair of the National Research Council’s 2004 Report, “Biotechnology Research in an Age of Terrorism,” I developed expertise on the challenge of bioterrorism threats. Science has developed new technologies that can detect and identify pathogens quickly. Now what is needed are new public policies that enable us to employ these technologies effectively.

GF: I still love doing experiments — it’s my first love — and several colleagues have offered me space in their labs. So, in the future, you are likely to find me behind a microscope and not at a desk.

A proposed project would provide a way to store carbon indefinitely in the tissues of specially engineered plants.

Image
Making green drugs: tapping into nature without tapping it out
Plant Biology

By learning from nature without overtaxing it, Whitehead Institute Member Jing-Ke Weng aims to help develop potent new drugs for a plethora of medical problems while addressing some of the environmental concerns of typical drug development.